How to Write Emulator – Intro

To begin, this isn’t technically an emulator, the system I’m trying to model isn’t real. This is more of a simulator, but that’s less of a catchy search word on the Internet.

What is Core War

“Core War is a 1984 programming game created by D. G. Jones and A. K. Dewdney in which two or more battle programs (called “warriors”) compete for control of a virtual computer. These battle programs are written in an abstract assembly language called Redcode.” Wikipedia

There are some terms that are helpful to know, and which I will probably end up mixing together

I’m making a version of the MARS in C++, which can run and interpret the Redcode programming language. The aim being to create a simulator that can load and execute Redcode programs, displaying the state of the simulator and possibly allow running programs to be debugged.

Each instruction contains an opcode and two operands. The opcode can have an optional modifier, and the operands can have optional addressing modes. The combination of the simple opcodes with the modifiers and addressing modes allows complex “Warriors” to be created. The aim being to write a warrior that will outlast all the other running warriors in the simulation.

To make this work, I need to create the following sections 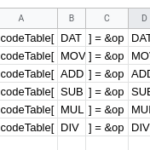 How to Write Emulator – Automating Tedious Programming with Excel

How to Write Emulator – Opcodes Jumptables 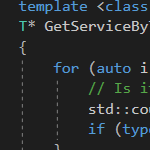